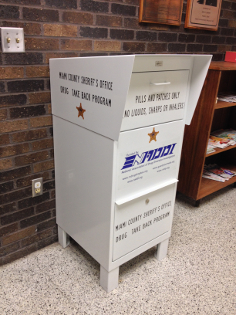 The Miami County Sheriff's Office has a prescription drug drop-off box located in the lobby of the Sheriff's Office, 201 W. Main St., Troy. The box was received from the National Association of Drug Diversion Investigators (NADDI) which is a non-profit organization that facilitates cooperation between law enforcement, healthcare professionals, state regulatory agencies and pharmaceutical manufacturers in the prevention and investigation of prescription drug diversion. The box was received free of charge through a grant.

The drug drop boxes will allow anyone to drop off unused/expired prescription drugs at the Sheriff's Office and Incarceration Facility during normal business hours during the weekdays.

There is no paperwork to complete and no one you need to speak with, simply drop your old or unused prescription pills in the box. The pills are destroyed in a manner that does not cause environmental harm by getting into our rivers, streams, and water table. By ridding one's household of used or unwanted medications it also reduces the likelihood of young people having access to abuse them. We will also continue to partner with the Miami County Sanitary Engineer's Office hosting at least two drug drop-off dates per year, usually in the spring and fall. The next date being Saturday, April 28, 2018 from 10:00 am to 2:00 pm.

Any items dropped off should be in pill or patch form only, no liquids or needles will be accepted. We would also request that all pills be placed in a clear plastic baggie and empty pill bottles discarded.